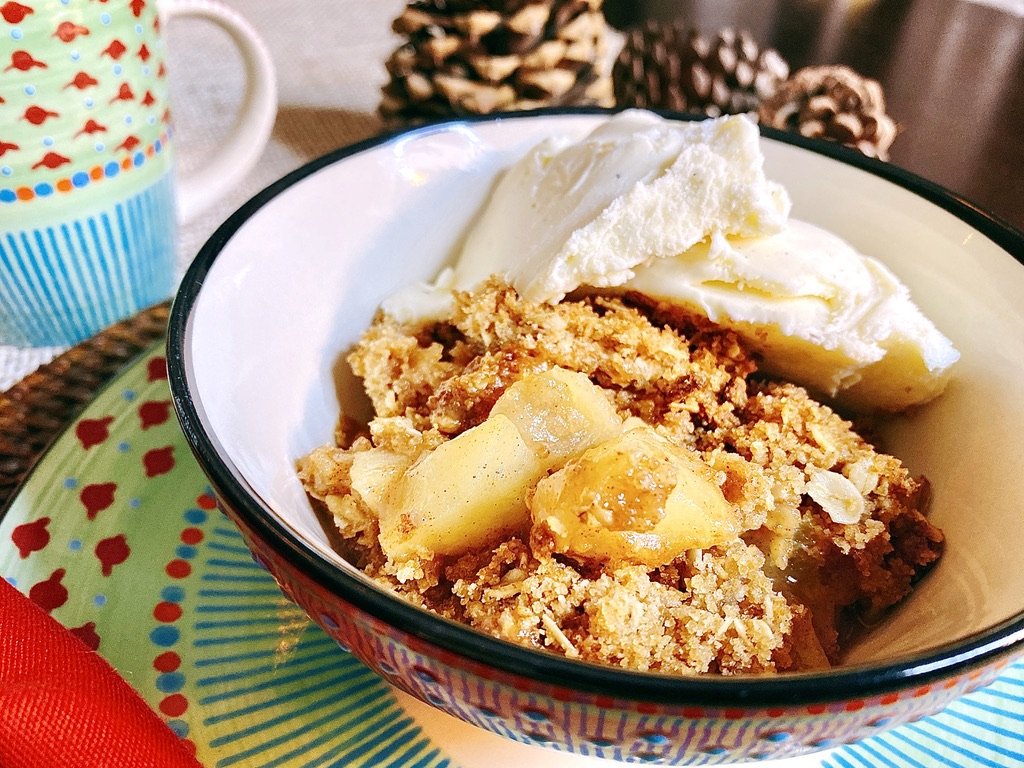 For those looking for vegan Christmas desserts, this Vegan Apple Crisp recipe is for you. If I didn’t tell you it was vegan, I bet you’d never know. It’s easy to make, packed with sweet apple flavors and topped with just the right amount of buttery crunchiness. It is made with no oil, butter or refined sugar. This is a healthier version of the classic apple crisp,  and you may not be able to tell the difference.

Really, the best vegan holiday desserts are the ones that taste undetectably vegan. Everyone will enjoy this healthy Christmas dessert!

You might be tempted to skip this step and not remove the apple skin when making this vegan apple crisp. However, please don’t. When you remove the skin, you allow the juicy sweetness of the apple to create the caramelized texture of the crisp.

2. Cut the apples into small cubes.

Like few things in this world, the smaller you chop the apples, the better. If the cubes are too big though, they will not cool through and will not get soft and tender. Some people like to slice the apples into strips but I’ve found that makes the apples mushy.

These apples are the star of your dessert so use the best ones you can find. Those that are crisp and naturally sweet are the best baking apples.  Ones to consider include:

This recipe is one of the best vegan Christmas desserts if it is served warm. While warm, you can taste each and every flavor and the crispy topping stays crisp. Want to upgrade your treat? Serve this vegan apple crisp with a scoop of cashew or coconut milk-based “nice creams” or other vegan frozen non-dairy alternative.

This recipe is called a crisp because when it is baked as it should be, the streusel-like topping is perfectly crispy. Don’t be tempted to take it out of the oven too soon.

The truth is that there shouldn’t be leftovers of this super yummy dessert. However if there is some not eaten, store it in an air-tight container. It will still taste good the next day but it just won’t be as crunchy. It is best to make it in small batches.

Why use vegan butter in vegan Christmas desserts?

This Vegan Apple Crisp recipe calls for vegan butter. Some vegan recipes omit any butter alternatives whatsoever in their crisps, but I like the richness it adds. Using a plant-based (vegan) butter is a helpful choice. This non-dairy butter substitute is very similar to margarine. Typically they are both made by combining water with a plant-derived oil, like olive, palm, avocado, coconut, or a mixture of oils.

Can this recipe be gluten-free too?

Yes this can be one of the most delicious gluten-free holiday desserts if you want it to be! The only thing you will need to substitute is the flour in the recipe. You can use cassava flour, oat flour, a gluten-free flour blend, and almond flour instead of all-purpose flour. The rolled oats found in the topping are naturally gluten-free.

I know you will absolutely love this easy vegan apple crisp recipe! It really showed me that vegan Christmas desserts can be super yummy for everyone…not just vegans. Honestly, if you don’t tell anyone, no one will even know it’s healthy!

If you enjoy cooking and eating healthy recipes, try this one too: