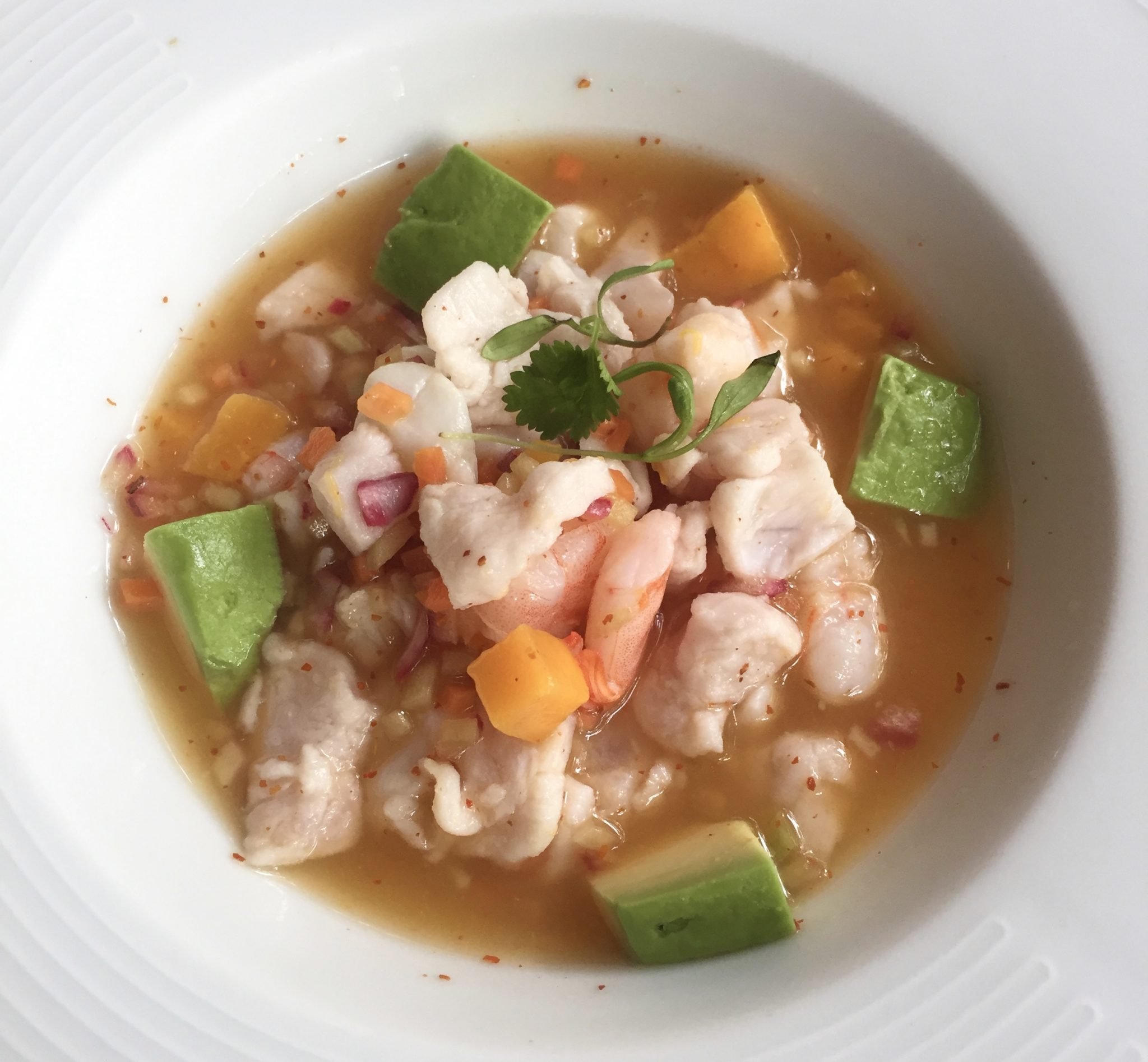 If you’re going to Mexico City on business, you probably won’t be doing a lot of sightseeing. Getting around during the week is a precisely timed exercise aimed at avoiding traffic. So while you may not see many sights, you will do plenty of eating and drinking. During a recent business trip I spent almost the entire time in four restaurants in 24 hours. It was a lesson in how business is done in Mexico, and fortunately, it was a delicious one.

We flew direct out of Tijuana, which is a breeze now with the Cross Border Xpress(CBX). Parked the car in long term parking ($15-20 a night) and we were through customs and at the gate in 15 minutes. It was an outstanding experience that I hope more people departing from So. California will try.

Eat at the neighborhood restaurants.

There are many famous, destination restaurants in Mexico City like Pujol, and if you have the presence of mind to get a reservation, well lucky you! Our trip was being directed by a local, so we trusted that he would point us in the right direction. He did not let us down.

After landing, our host directed us to a charming restaurant in Polanco called Emilio for a late lunch. We ordered a perfect ceviche, little rounds of foie gras with fresh fig, and what we thought was going to be a duck taco, but was more like a duck egg roll with a tangy-sweet sauce. Surprising and delicious.

Perhaps even more delightful than the food was the environment. We sat on the open patio and the people watching was superb. Emilio’s is directly across the street from Lincoln Park (yes, there is a statue of Lincoln there). It’s a beautiful green beltway with statues and water features. Musicians stand in front of the patio and play loudly for pesos, but they moved on after five minutes or so. Emilio’s was full of locals and an excellent introduction to where to eat during a business trip in Mexico City.

Our host showed up as we were finishing and had a quick café. Then we were off to our hotel, the gorgeous Hotel Live Aqua located in Bosques de las Lomas. A little off the beaten path, he had recommended the hotel since it was close to his office. It exceeded my expectations, in design, room comfort and service.

We left our bags and walked through the adjacent mall, ending our jaunt at Costa Guadiana. He promptly ordered tequila for the table. The second meal had begun and we had barely finished digesting our first.

But, as is done in Mexico, we sipped our tequila (El Aguila, a dangerously smooth sipping tequila) and chatted for quite a long while. We eventually ordered a few small plates, including a spectacularly colored and flavored cochinta pibil appetizer. We walked back to our hotel and had an excellent night’s sleep.

The next day, after a few hours of work, we went to one of our host’s favorite restaurants, Loma Linda. We headed up to the second floor patio and it was buzzing. Mind you it was already 2 pm, but lunch was really just happening in earnest at that hour. It was clear that lots of business was being conducted here. Loma Linda has five locations in the city and several are in the heart of the business district.

Lunch started with beers and wine (we had a lovely red from Adobe Guadalupe, one of our favorite wineries in Valle de Guadalupe). Have you ever heard of Jugo de Carne (meat juice)? I had not and though I was a little hesitant it was fantastic. It’s a very rich beef broth, thick but without any chunks in it. It’s served with slices of lime, Worcestershire sauce and steak sauce. A little squirt of lime was all it needed and I believe it was created to soothe what ails you.

Our waiter brought a tray of raw meat to the table and our host selected three cuts. The food was all served family style, including guacamole, pork tacos, incredibly flavorful corn and crispy, puffy small potatoes (need I say more?). The meat arrived on a smoking hot plancha that was placed in the center of the table and was accompanied by homemade corn tortillas and various salsas.

The level of service in Mexico City is something to behold.

From the time we sat at our table to being served drinks and our soup was about 12 minutes. There is such a high level of staff to customers that they can really deliver on service.

At the end of our meal, I tried a shaken Carajill – a coffee cocktail enhanced with Licor 43. I don’t know how I’ve missed this treat considering all the times I have been to Mexico, but I am so happy to have discovered it.

Lunch lasted about 3 hours. We went back to the office for some more  work and then took a quick break before heading out to dinner. I couldn’t believe it, but we were going to experience four restaurants in Mexico City within about 24 hours.

We wanted to see at least a little of the city so we drove into the center of town to a restaurant called Blanco Colima in the Roma section. The whole area is beautiful, but as you can see, the historic nature of the building made this a very special place.

Once again I started with El Aguila, which worried me as I was already starting to get used to the idea that this was the correct way to begin a meal. Drinking while conducting business is par for the course in Mexico City, like so much of Europe.

We ordered a variety of hot and cold small plates and there were a couple of real standouts (I couldn’t get great photos as the restaurant was so dark). A tiradito of pulpo was the flavor profile I so love in Mexican food. They know how to create the perfect balance of savory, sweet, salt and acid in a dish.

But the dish that bowled over the entire table was dessert.

Imagine a small cake, not too sweet, with a slightly caramelized top crust, filled with Manchego cheese. Oh, but that’s not all. It was served on a membrillo sauce (quince paste) with a perfect quenelle of guava ice cream on the side. We all wanted another, but couldn’t bring ourselves to order it after all the food we had eaten.

Because it was just time for something pretty. The

Bloodies at the beach. Need we say more? Well, thi

Bright and early on the 18th green at Pebble Beach

Spring is sprunging! The weather is warmer, birds

I created this recipe for Monte Cristo with a Twis

Putting two kids through college at the same time