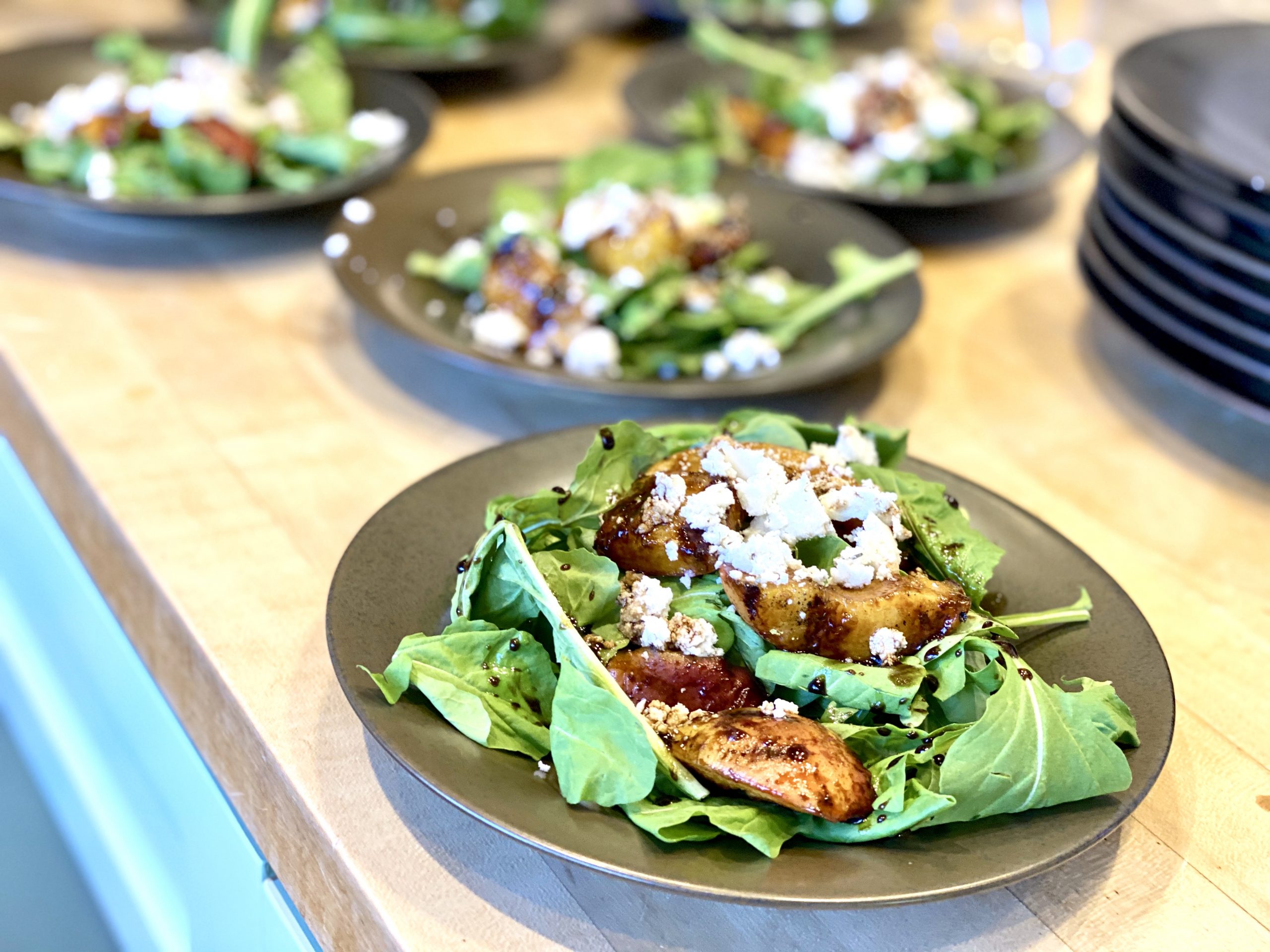 Guest post by Patti Werry – You know that friend you had when you were growing up who always made you do crazy things that you would never dream of doing? And then you did them, and it was always really fun? Yeah, well, Jon is that friend of mine. So when he asked me if I knew how to make goat cheese, I knew something was up.

While I can’t divulge many of our high school antics, I can tell you that some things never change. After 40 years of friendship, Jon is still at it! We recently got together to play around with some recipe ideas for an upcoming project. (Rest assured we’ve been in each other’s “bubble”since the pandemic began.) Jon thought it would be a great idea to start with something simple that we’ve both made many times – not!

Rather, Jon thought it made perfect sense to try something neither of us have ever done. Is this starting to sound familiar? He suggested we learn how to make goat cheese. I mean, if everybody is making bread right now, we need to kick it up a notch and make the cheese to go with it, amiright?

I love goat cheese, so I was immediately on board. Fortunately, Jon had received a #notsponsored Urban Cheesecraft DIY Goat Cheese Kit from Williams Sonoma for Christmas. You can also order them from Standing Stone Farms. We knew we were in good hands. The kit came with everything we needed, except for goat’s milk. So we headed to the local farmer’s market to pick up some. Jon bought a quart in a nifty old fashioned glass bottle. If Jon doesn’t return it to get back his $2 deposit or have it refilled, it would make a cool retro vase.

I was in charge of reviewing the directions before we began. I realized that we hadn’t bought enough goat milk. But no worries, we could easily cut the recipe in half. The first decision we had to make was, creamy or firm? We voted for firm. I compared the recipes for creamy versus firm and we were off to the races.

How to Make Goat Cheese

The kit included citric acid, a thermometer, cheesecloth (now I know how it got its name!), cheese salt and molds. Making goat cheese felt a lot like a science experiment. The first step was to dissolve the citric acid in water. (Science lesson: adding citric acid to milk increases the acidity level – essential to making cheese.)

Next, we added the citric acid solution to the milk and began heating it in a large pot. This is where the thermometer came in. We had to heat the milk to 185-190 degrees without letting it boil. Jon was in charge of that tricky task. (It was his idea, remember?) As the milk was just about to the desired temp, Jon asked me if I’d remembered to cut the measurements for the citric acid solution in half. Oops!

You Can Add Cow’s Milk

Fortunately, I remembered that the instructions said you could use half cow’s milk and half goat milk. So we made up the missing milk with cow’s milk. This was also about the time that I realized that I had been following the directions for the creamy recipe when we had intended to make the firm recipe. Creamy it is!

A great cooking skill is knowing how to cover up your mistakes, so Jon and I forged ahead. We added the milk, warmed it to the desired temperature, and watched for the telltale signs of coagulation. We were so excited when we saw those white and yellow separations! After letting it stand for 15 minutes, we poured the mixture into a cheesecloth-lined bowl. And voila – cheese curds! (They looked like the curds in the small curd cottage cheese I’ve eaten my whole life. Not like Wisconsin cheese curds!)

After the cheese drained, we added the cheese salt (which was basically really, really fine salt) and some herbs de Provence. We filled two of the molds (little plastic cups with drainage holes) with the cheese. We kept the rest in the cheesecloth, wound up tight into a ball and put it all in the frig to drain some more.

Is That Really How to Make Goat Cheese?

So how did it taste, you’re wondering? It was pretty darn good! We served it with a charcuterie board and were delighted with the consistency. To be honest, it fell somewhere between creamy and firm, due to my recipe mash up. The flavor was good, although we both agreed next time we would use more salt. The flavor can be adjusted when you add the salt and herbs. We definitely erred on the side of caution since it was our first attempt. The cheese also was pretty mild due to our hybrid milk combo, so we’d definitely recommend using 100 percent goat milk.

We also made a peach, arugula and goat cheese salad (recipe follows) which was extremely simple and a huge hit with our families.

We Learned How to Make Goat Cheese!

It took about an hour to make the cheese, and the recipe yielded approximately 12 ounces. Making the goat cheese was surprisingly easy and very rewarding! Although our teen selves might roll their eyes and say we’ve lost our adventurous edge, there’s something to be said for doing something simple and satisfying. Give it a try and let us know how it goes!

If you’re not familiar, goat cheese is made from – you guessed it – goat’s milk. It is a very versatile cheese that can be creamy or firm, made with herbs or spices, and used for everything from appetizers to entrees to desserts. Goat cheese – or chèvre (shev) – became very popular in the United States in the early ‘80s. I still have my much loved copy of Chèvre! The Goat Cheese Cookbook. It was published in 1983 and still bears the post-it notes marking my favorite recipes from long ago.

Recipe: How to Make Goat Cheese

Note: this recipe uses powdered citric acid, but you can also find recipes that use lemon juice and/or vinegar instead.

(Adapted from Williams-Sonoma On the Grill by Willie Cooper, Oxmoor House 2009)

Learning How to Make Goat Cheese is Easy!

Once you’ve got this recipe mastered, think of all the dishes you can make with the result. Learning how to make goat cheese will change up your meals considerably!

For more great recipes using cheese as an ingredient, check out these favorites from our kitchen:

As a little girl Patti would only eat three things – hot dogs, cottage cheese and canned fruit cocktail. She gained confidence in her cooking skills when she wooed her husband-to-be with homemade pasta with three sauces to mirror the Italian flag. Born in San Francisco, Patti attended UC Berkeley and went on to a career in corporate communications from which she retired in 2018. She keeps busy teaching Jazzercise fitness classes, playing tennis, volunteering at the Palm Springs Animal Shelter, writing letters to the editor and of course, cooking. Patti and her husband Scott are residents of Indian Wells, CA.