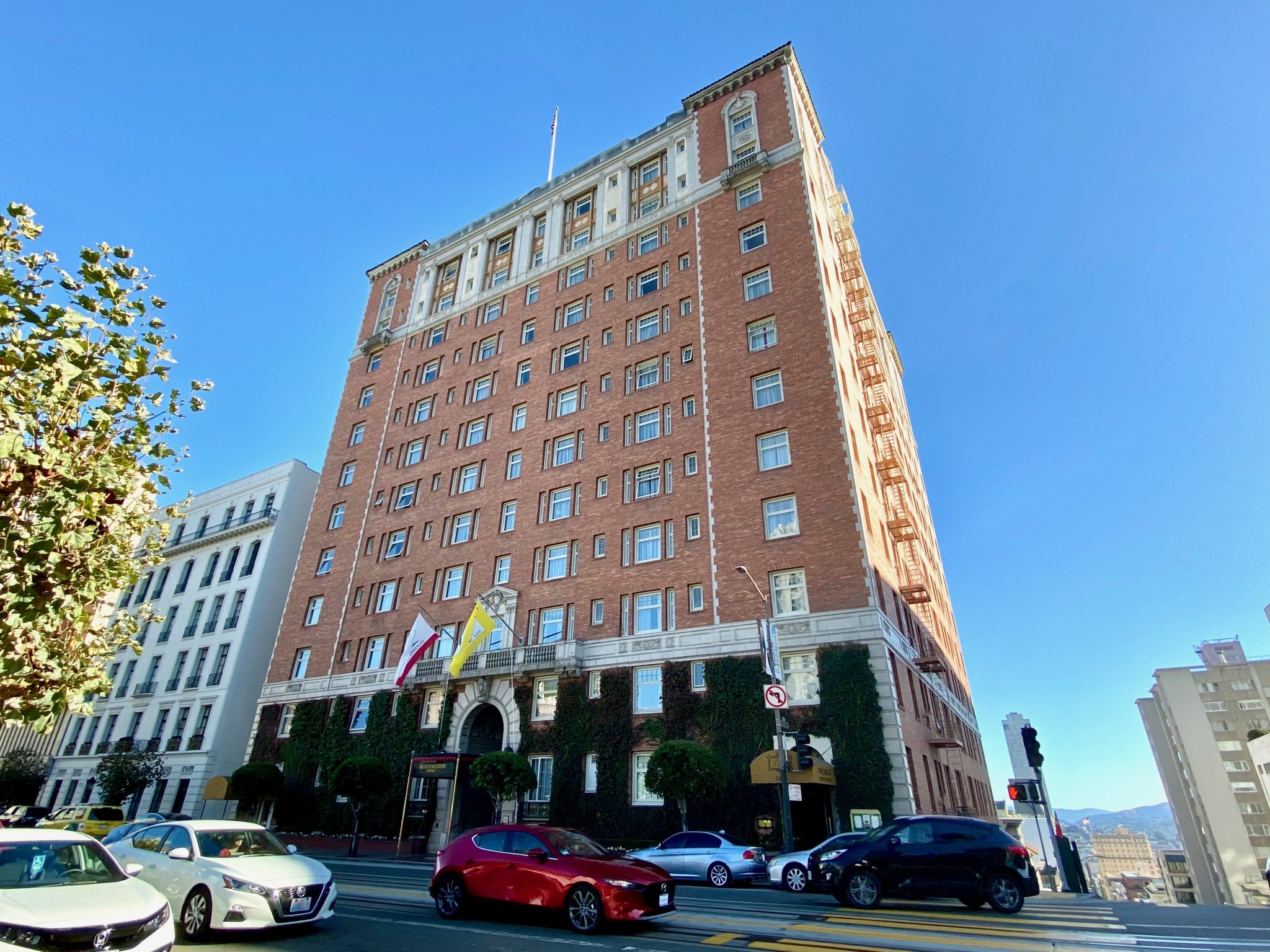 In all the years I lived in San Francisco, I rode the California Street cable car many times up and over Nob Hill. Along this route, riders can marvel at the tony estates and historic high rise buildings that were once housed the richest residents on the West Coast. One of those buildings still stands out as a historic landmark, now a modern hotel within a classic skin. The Huntington Hotel is a great example of a historic San Francisco hotel.

Built in 1924, the Huntington Hotel was originally constructed as a luxury apartment building. Standing 12 floors at the apex of Nob Hill, the Huntington enjoys some of the best views of San Francisco money could buy back then. Luckily, most of those views have been preserved to this day. The Huntington is a historic San Francisco Hotel still in touch with its founding roots.

The Most Spacious Rooms Ever

Since it was originally apartments, the Huntington Hotel contains 134 enormous rooms – most are suites. Every suite has a living room, bedroom and bathroom, and all are quite spacious. My corner suite on the 10th floor was larger than most of my apartments in my younger days! For the reasonable rates the Huntington Hotel is charging, these rooms are a massive value.

The living room in my suite had a couch, two arm chairs, an entertainment unit, a large desk and an entire dining room set. Even with all that furniture, there was still a ton of room to move around. Massive I tell you!

The bedroom was large by any hotel standards, and somehow next to that gigantic living room it seemed small. However it was not small in the least, with a king size bed, set of drawers and a close that ran the full length of the room.

In the bathroom, I noticed a feature I have only seen in European hotels. The large glass-enclosed shower area also contained a full bathtub. It’s conceivable that one person could soak in the tub while another showered right there next to them. Whatever bathing rituals you are into, there are options at the Huntington Hotel.

Back in the day when San Francisco was the West Coast financial hub, several prominent families made their homes on Nob Hill. The 1906 earthquake and subsequent fires took most of these grand buildings. In their places rose new magnificent structures to honor what had been lost. The Huntington Hotel stands out as a historic San Francisco hotel which is part of this revival.

The Huntington’s neighbors are the Mark Hopkins Hotel, The Fairmont Hotel, Grace Cathedral and other iconic structures. One of San Francisco’s fabled seven hills, Nob Hill has always carried an air of luxury. With the California Street cable car line running past, it’s easy for guests to hop on and ride down the hill to the Financial District. Visitors can also change cable cars a couple of blocks down at Powell Street, and catch the Powell Street cable car down to Union Square for a nice day of shopping.

One of the cool things about the Huntington Hotel has been – and perhaps will forever be – the clubby, dark and awesome Big Four Restaurant. It was named after the four big railroad barons that built mansions on Nob Hill in the late 1800s. A pivotal part of this historic San Francisco hotel, the restaurant is a retro throwback to days gone by. Complete with a guy playing a grand piano in the bar, the Big Four conjures images of three martini lunches and big deals being made in the corner booth.

I sat in the bar and enjoyed a martini (of course) while people watching. Young couples, tech execs and investment bankers mixed with ladies tired after a day of shopping. The bartender was personable and quick-witted, and mixed up drinks right and left. Clearly the team that works here gets along well, because the vibe was downright jovial.

My appetite was sated by a delicious Wedge Salad with Bleu Cheese Dressing and Bacon Crumbles. After that, I enjoyed a bowl of one of the most delicious French Onion Soups I have ever tasted. Seriously. The melty cheese on top, the floating bread underneath, and finally the onion soup itself – perfect combination. Of course after all that I was so full, So then I ordered the creme brulee, another of my favorite dishes, and this one had a lemon flavor I really liked.

Next time I visit San Francisco, I think the Huntington Hotel is one of my newest happy places. Enormous rooms, great location on Nob Hill, fantastic Big Four Restaurant and really interesting history. All the things I love in one place – this historic San Francisco hotel is now among my favorites!

Rates at the Huntington Hotel are reasonable for all they offer. Rooms start at $175/night USD.