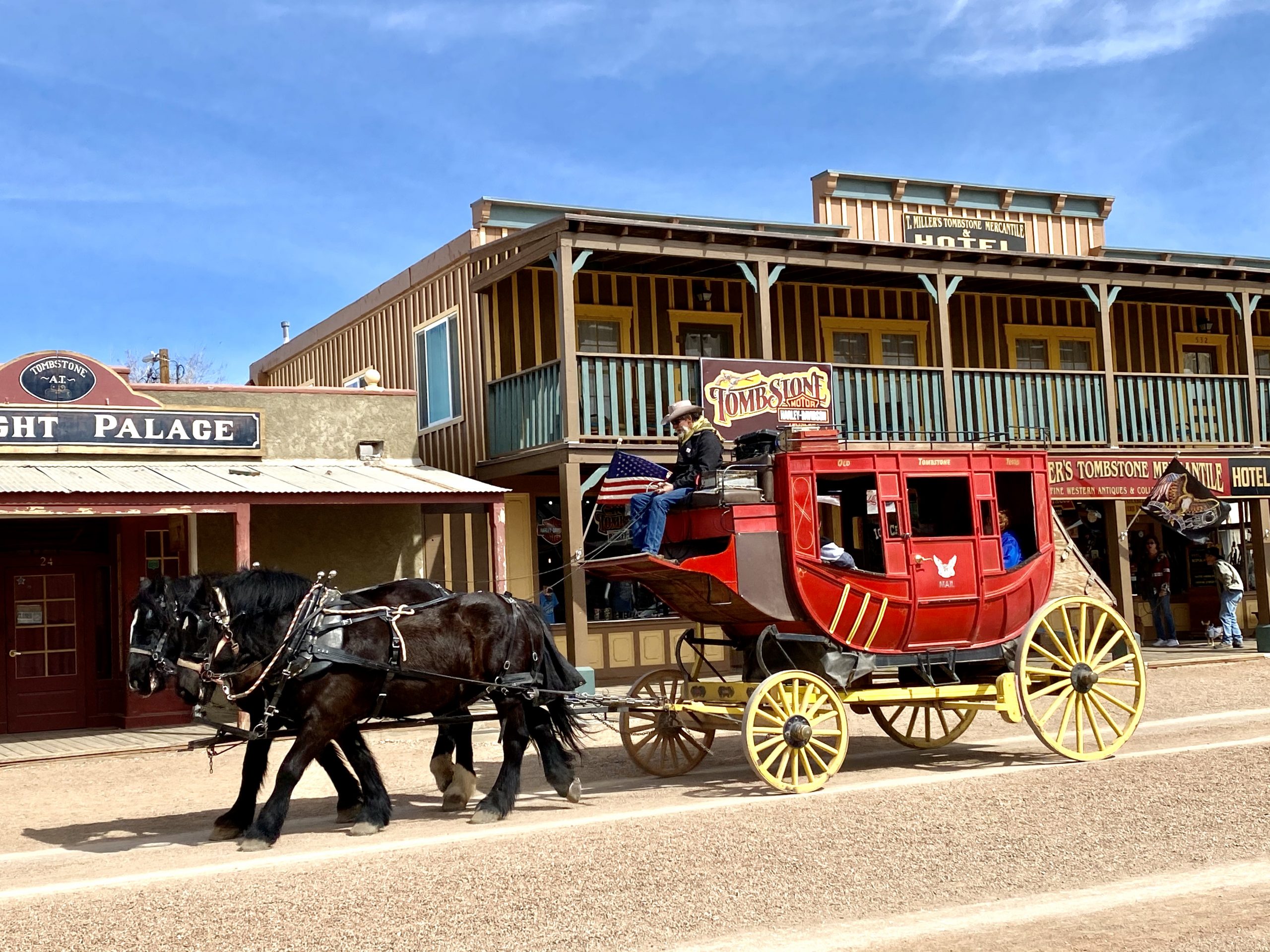 There’s something about the Old West that draws curious folks. It always has and still does possess a mysterious quality in its rugged beauty and shoot-em-up history. We’ve been itching to get out of town, and recently had the chance take a road trip to Arizona. We set out from San Diego to explore Arizona’s wild west, and experience some authentic Western history. There are so many different ways to enjoy Arizona’s beauty, and we’ve enjoyed several of them. We’ve visited luxurious resorts, hiked through gorgeous red rock landscapes, relaxed in world-class spas and gotten zen in some of the most spiritually-charged places on earth. So this time, we decided to dig more deeply and see Arizona’s old west by car.

Since we only had a few days scheduled for this trip, we stuck to Phoenix and Tucson as our home bases. Both cities were starting their return to more normal operations from the pandemic lock-downs. Residents and visitors were still being careful and safe, so we did not feel uncomfortable in any way. Besides, the weather was so perfect we spent the majority of our time outdoors in the fresh, clean air and sunshine. 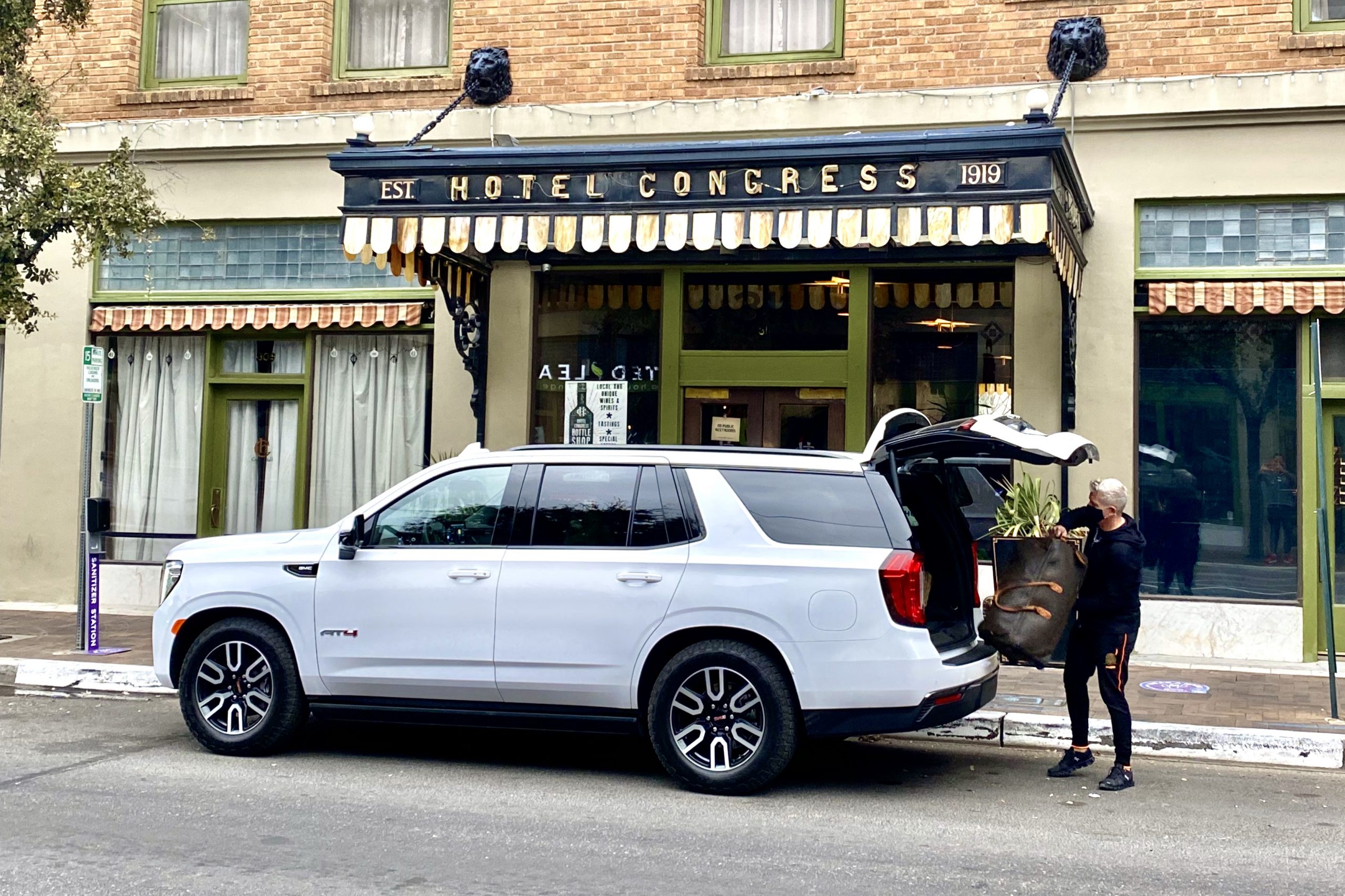 Arizona has such a rich history in the annals of old western lore. There were so many roads we could have taken to see some of the highlights. While taking in all this history, we also wanted Ava to see Arizona State University in Phoenix (Tempe) and University of Arizona in Tucson. A full agenda to be sure, but we managed to fit a lot in our 5-day/4-night adventure.

We laid out a mapped route from San Diego to Scottsdale (Phoenix) and then on the Tucson. This way we’d have time to explore some of the coolest examples of Arizona’s old west. And that we did!

Here’s a few of the highlights from our family road trip to see Arizona’s old west by car.

From our suite at the mid-century modern Hotel Valley Ho in Scottsdale, we took in the breathtaking scenery. Our rooms were on the seventh floor, with a floor to ceiling glass wall facing West and balconies as well. When evenings rolled around, we watched the sun set behind those iconic red rock mountains that have made Arizona so famous the world over. The girls said it reminded them of the Cars ride at Disneyland, not knowing the ride was influenced by this landscape. Not the other way around!

We could imagine what settlers might have seen when they first rolled into the Salt River Valley back in the 1800s. Back then the whole area was just a mall collection of rough-and-tumble buildings and a few mining towns. In fact, mining is what lured most early settlers from the East Coast to the arid desert of Arizona. Silver and copper mines popped up across the landscape, and people started to get rich on the ore they were uncovering. With that money flowing, towns began to form. And the wealth brought with it more than a few nefarious characters. But we will get to that soon enough. We were ready to see Arizona’s Old West by car!

Scottsdale has roots back to the 1800s, when Chaplain Winfield Scott bought up a bunch of land for 50 cents an acre and started attracting others to do the same.  Today over 40% of Scottsdale’s land is dedicated to open desert and wildlife preserves. With strong Native American roots and many active Tribes, Scottsdale has a rich cultural history. The city itself is home to more than 70 hotels, 50 spas and 200+ golf courses, so I guess people have loved coming here for a long time. So do we!

Our hotel was within walking distance of  Old Town Scottsdale, now a hub of historic buildings renewed by restaurants, shops, art galleries and more. We ventured in to explore Arizona’s old west from the pedestrian level. Walking these streets gave us all a good sense of what it might have been like back in the 1880s when it was created . Historic storefronts and architectural styles of the Old West are well preserved here, spanning about one square mile. The sidewalks are wooden boardwalks along many of the streets. It’s really very charming, and even has it’s own Museum of the West called Western Spirit (worth a gander).

Our family was in the mood for Mexican food, and we found a great restaurant called Cien Agaves that we highly recommend. Not only was the food delicious here, but their list of tequilas was exhaustive and amazing. Triton and I settled into a couple of authentic margaritas (Cadillac only, please – on the rocks with a salted rim.)

We continued our tour to see Arizona’s Old West by car with a fun day trip out to Goldfield Ghost Town. We went to tour the historic Mammoth Gold Mine, first settled in 1893. The town was the site of a prolific gold mine drawing treasure seekers from all over to its growing Western metropolis. Things grew quickly and died out just as quickly when the mine stopped performing, and the town ghosted around the early 1900s. Now a major attraction for visitors seeking Old West lore, Goldfield is full of life again. There’s a mine tour complete with hard hats, a gunslinger’s shoot-out, a locomotive ride and tour and even a zipline. Fun day for the whole family, and just a 40-minute drive from Scottsdale.

Our kids made a beeline for Prospector’s Place, where they could sluice for jewels and pan for gold. Since both Ava and Sophia are obsessed with crystals right now, they opted for the jewels. We got each of them a giant bag of sand and mystery rocks which they took over to the sluice to sort over the running water. Everyone was pretty amazed at what they uncovered, and they each came away with dozens of beautiful crystals, geodes and other rocky prizes.

Another highlight was the bordello (!!) but honestly it was really interesting. Those ladies worked hard back in the day, and were among the richest residents in Goldfield. As we toured their former quarters, it was hard to believe they were able to entertain so many residents in that tiny apartment. Where there’s a will, there’s a way!

Nearby in the city of Gilbert, Joe’s Farm Grill is an enormously popular restaurant with residents and visitors alike. What started as a working farm morphed into a homestead in the 1960s with a small restaurant soon to follow. Now the original family home has been converted into a sweet restaurant with lots of garden seating. Next door, the working farm continues as Agritopia – an organic farm growing colorful crops in the rich valley soil.

We chowed down on delicious home cooking, and loved the menu at Joe’s Farm Stand for its simplicity and down-home flavors.  With barbecue, grilled meats and a variety of things to please little kids, the food here is just delicious.

Afterwards make sure you take a few minutes to stroll through the public gardens and farm area. It appeared to us that Agritopia Farm was a community concept in farming that is even more relevant today than when it was first formed in 1927. Farmers were tending their individual plots when we visited – some were quite elaborate and some more utilitarian. Nearby there is a charming store and farm stand where visitors can buy a variety of goods and fresh produce to bring home.

Just 90 minutes down the highway from the Scottsdale/Phoenix area, Tucson is even deeper into the Old West. Smaller than Phoenix and dare I say perhaps more artsy, Tucson has a small town vibe with the right amount of sophistication. It’s a college town and home to the University of Arizona since 1885. So this brings fresh young energy to what began as an Old Western town in 1775.

Tucson is positioned in the middle of the Sonoran Desert, surrounded by hills and colorful terrain that includes iconic red rocks, saguaro cactus and more. This vibrant Southwestern city is home to two of the most iconic spa brands in the world – Miraval Resort and Canyon Ranch. The whole area is gorgeous and peaceful – it just makes you relax. Accommodations range from ultra chic to basic, with some 15,000 hotel rooms in the area. We stayed downtown at the historic Hotel Congress. The hotel was built in 1819 at the core of Tucson’s burgeoning business district next to the train depot. Famous for many things throughout its history that I will soon explain in a dedicated blog post, Hotel Congress is also said to be haunted. Boo!

Tombstone and the OK Corral

Arguably the most famous of all Old Western towns, Tombstone must not be missed. It takes about 40 minutes to drive here from Tucson. The drive meanders through the deep Southwestern desert and small towns along the way. Tombstone itself is very well preserved, ready to welcome visitors. The majority of the attractions here are authentic, with the historic OK Corral at its center. This site is famous for the shootout between Wyatt Earp, Doc Holliday and their gang and the McLaurys and Clantons in 1881. Daily reenactments of the shootout are staged at the OK Corral. The tour is pretty cool if you are into Western history. If not, there is a great gift shop where you can spend some time while the rest of your family takes in some history.

The town of Tombstone is fascinating and full of preserved history. We toured the Bird Cage Theater, chock full of Western artifacts. It also the site of the longest running poker game in Arizona history. The tour guide was kind of like a Saturday Night Live act, but the history here is the real deal. Historically preserved buildings greet visitors one right after the other through the center of town. Shops, restaurants, inns and more are located inside, with lots to see and do. We had lunch inside the Crystal Palace Saloon (est. 1879) for a peek inside an old western saloon and dance hall. (Great burgers and onion rings here, BTW).

Although we did not have time for this tour, I really wanted to see Good Enough Silver Mine while we visited Tombstone. This attraction gets great reviews and looks so cool with its mine tours, trolley tours and ghost tours.

Regardless of your religious beliefs, the Mission San Xavier del Bac is worth a visit while in Tucson. Built in 1783, the Mission is considered by experts as the best example of Spanish Colonial architecture in the US.

From the exterior, it looks unfinished – like the builders never got to the second bell tower. But from the inside, the frescoes and tile work are truly impressive. Combined with the flickering votive candles and the voluminous ceilings, the effect made me feel like I was in Europe. For those feeling perky, there is a nearby path that climbs to a cross on the hilltop. We did not make that pilgrimage though. We opted instead for some warm and delicious Indian Fry Bread purchased from locals in the courtyard.

Find out more about fun things to do in Tucson here. You can see Arizona’s old west by car pretty much any time of the year!

Maybe a little obsessed with The Sound of Music wh

Oktoberfest is Octoberbest! 🍺 🍻 🍺 We had

We couldn't resist grabbing a moment on this rainb

Climb every mountain, sister! Here we are “hikin