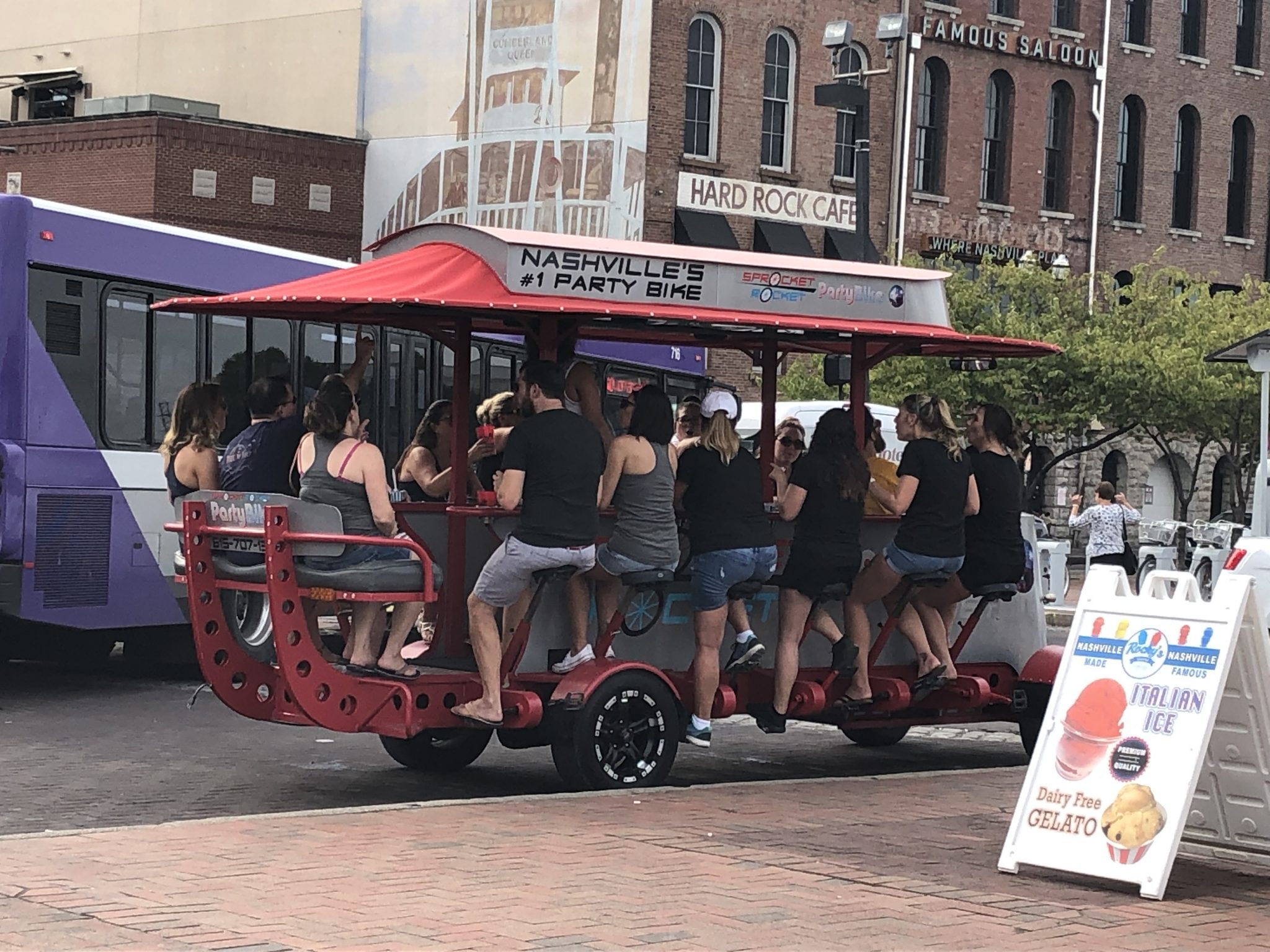 Disclosure: I was provided free tickets to several of the attractions below by the Nashville Visitor’s Bureau. All opinions are my own.

Music City. Athens of the South. The Home of Country Music. Known by a variety of nicknames, Nashville, Tennessee is a city of many faces. Home to museums, music halls, artistic venues and excellent food, Nashville definitely has something for everyone. Here are some pointers about things to do in Nashville.

8 Great Things To Do In Nashville

Hosting walking tours through the streets of Nashville, United Street Tours is the Nashville tour you didn’t know you needed. With deep African-American roots, Nashville has a full of history from music to civil rights.

Founded by Chakita Patterson when she discovered that her students weren’t aware of how much Black history surrounded them in the city, United Street Tours provides a unique experience. From the Civil Rights tour to the tour that delves into neighborhood diversity, you’ll learn something new at every turn.

Also available were music clubs where artists such as Ray Charles, Etta James and a young Jimi Hendrix performed. Unfortunately, many of those original businesses were torn down in the 1970’s when the interstate was built. But Jefferson Street Sound Museum has preserved many artifacts. If you’re lucky, founder Lorenzo Washington will be there to give you a personal tour so you can learn more about the area’s amazing history.

Jefferson Street Sound Museum is open to the public on Saturdays from 11am to 4pm and is also accessible via select United Street Tours.

Another find via United Street Tours is Woolworth on 5th. A piece of Nashville’s civil rights heritage, Woolworth on 5th is a place to learn some history while also grabbing a great meal.

One of the original Woolworth five and dime stores, the lunch counter in the Nashville store opened in the mid-1920’s. It began serving meals to those who were shopping in the store. Due to the segregation laws of Tennessee, Black residents were not allowed to eat at the counter. In February, 1960, African-American students at the local Black colleges moved to desegregate at the lunch counters of downtown. One of those protesters from local Fisk University was Congressman John Lewis. Via the students’ efforts, the counters were desegregated beginning in April, 1960.

Now a historical site, there’s a working restaurant in the location of the former store. While the lunch counter currently there isn’t the same counter that was used in the desegregation movement, the restaurant does have an old fashion feel and displays photos from the era.

The food available at Woolworth on 5th is generally standard dinner fare but don’t let that fool you. There is a wide variety of choices and the quality is high end and really stands out. There’s also a brunch menu and (yeah!) alcoholic beverage choices. I highly suggest the burgers and fries – they tasted homemade and authentic; it was one of the best I’ve had in a long time.

Country music is a huge draw for people visiting Nashville. Known as the home of country music, Nashville is home to many country western museums. Three you need to visit are the Country Music Hall of Fame, the Musicians Hall of Fame and the Ryman Auditorium.

While the Country Music Hall of Fame and the Musicians Hall of Fame have a few overlapping entries there are distinct differences. The Country Music Hall of Fame features exclusively those who work in the Country Western music genre. Even if you’re not a country music fan you’ll recognize a variety of artists as the museum takes you from the early days of country right through modern times. Hundreds of gold and platinum records line the walls and there’s enough memorabilia displayed to keep you busy for days. There’s also an area that houses all of the Hall of Fame plaques based on the date they were inducted.

The Musicians Hall of Fame is a more musically diverse visit. Artists from Buddy Guy, The Crickets, Peter Frampton and Alabama are all inductees who are recognized for their musical abilities. In addition to the inductees, there is also the GRAMMY Music Gallery which includes an interactive space that describes the history of the GRAMMY awards.

The Ryman Auditorium is a shrine to those in the country music industry. Originally built as a religious revival spot (the pews still exist as seating), the Ryman eventually become home to the Grand Ole Opry for over 20 years and has been host to acts such as Mae West, Louis Armstrong, Elvis Presley, Patsy Cline and Johnny Cash. Once the Opry moved to a new location in the 1970’s, the Ryman sat empty and became rundown until it was restored into a music hall, saving a Nashville treasure. Self-guided tours along with backstage tours are available.

Country Music Hall of Fame – Open from 9am to 5pm every day, excluding Thanksgiving, Christmas Eve and Christmas Day.

Ryman Theater – Tours are available from 9am to 4pm every day. Due to live concerts, tours may be limited.

Musicians Hall of Fame – Open Monday-Saturday from 10am to 5pm

Located approximately 10 miles from downtown, Opryland Hotel is a must see when visiting Nashville. Built to help support The Grand Ole Opry once it moved from the Ryman to the suburbs, Opryland is a hotel and convention center that also has 9 acres of beautiful, quiet gardens and waterfalls.

In addition to gardens, convention space and over 2,000 rooms, Opryland Hotel also has SoundWaves. 4 acres of water slides, pools and a lazy river – perfect to help keep the kids entertained while you’re on vacation. Even if you’re not staying at the resort, the hotel is a great place to visit, take the Delta riverboat ride and even grab dinner at one of the 17 onsite bars and restaurants.

Visiting during Christmas? The resort is known for it’s ICE! Event that takes place every year. An indoor winter event, ICE! turns the resort into a sculptured ice extravaganza using more than 2 million pounds of ice. Be sure to wear your warm clothes – the temp inside during this event is only 9 degrees Fahrenheit.

Not a lot of time to explore the city? Hop on the Gray Line Double Decker City Tour for a great view and lots of information from their tour guides. Buses board at the end of Broadway right on the river. You’ll get an hour long tour that talks about attractions along the way such as the Ryman Auditorium, the Parthenon, Vanderbilt University and different neighborhoods along the way. I took this tour after a long day of walking around downtown and it was the perfect way to get a lay of the rest of the city without having the have a car or do any more walking.

There are several hop-on/hop-off trolleys that also do tours. I tried to do one but most people weren’t hopping off. So when you went to get back on at a venue, the trolley was full and you had to wait for another. It was very frustrating for me so I prefer the bus tour instead and made my own way when I wanted to see specific things.

Gray Line Bus Tour is wheelchair accessible and have several tours at various times throughout the day.

You can’t visit Nashville without visiting a honky-tonk bar. And the best place to have your choice of venues is lower Broadway in downtown Nashville. Also know as the Honky-Tonk Highway, Broadway is host to more than 25 bar/restaurants that feature local musicians playing music all day (and night) long.

The honky-tonks are great places to go to hear a variety of music and you won’t hear a bad musician in the bunch. That’s because a large majority of the musicians are backup players to some of the major artists in the area. Another great thing about the honky-tonks – none have a cover charge and there are no drink or food minimums. Which means you can go from venue to venue for free and listen as long as you’d like. Make sure when you’re visiting the honky-tonks that you remember to tip the musicians though. It’s tradition that they play for free and only get paid via tips.

Even if you don’t drink alcohol, be sure to make your way down there just for the people watching and to hear some good tunes at the venues. If you love to people watch, keep an eye out for the multitude of party buses, tractors, bikes, etc. Nashville has become a popular bridesmaid and bachelor party destination, so these vehicles are plentiful throughout downtown.

Note that honky-tonks are an adult adventure and not intended for children. It can get very crowded in downtown Nashville near the honky-tonks with lots of drinking and not always the best place for younger children due to the crowd sizes.